The Purdue Bell Tower is the most recognizable landmark on campus and is associated with numerous traditions.  It's not simply a timing machine but is also a symbol of Purdue's rich history which will never be forgotten.  As boilermakers, knowing the past helps us understand the current and give new meaning to the bell tower. 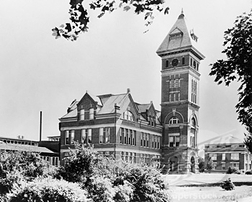 Old Heavilon Hall tower
The history of the four bells in the Purdue bell tower dates back to 1895, when they were installed in the newly built Heavilon Hall tower. The original tower was a gift from Howard Watch and Clock Co. of Boston. However, it was destroyed in a terrible fire just 4 days after it was built. In light of this tragedy, the brand new Purdue Bell Tower was constructed. President at that time declared that a new tower would go one brick higher, but it was actually nine bricks higher. 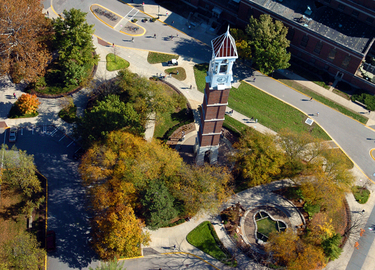 The tower is made of red brick trimmed with limestone.
Modeled after the original Heavilon Hall Tower, the new bell tower has a clock on each of its four faces. Electric clappers strike the bells to ring at the hour, half hour and end of classes. It is also equipped with an electronic carillon that plays Purdue's alma mater at various times during the day and evening and for special events on campus.

In 2005, victims of the lightning strike, the bells had not sounded and the clocks had not given the correct time for 40 days. Even though the repairs cost around 5000 dollars, everyone was excited to hear the bell again.

In 2011, Purdue once lit up the bell tower blue. The goal was to ask people and organizations to light up their homes or buildings in blue on Friday and spread awareness of autism.