The Purdue Boilermakers were once known as a powerhouse football team in the late 1800's. They were known for dominating the competition because the team was generally much larger than everyone else. Purdue University came to be known as the "Boilermakers" through the football team. 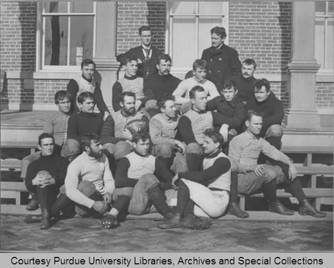 In the fall of 1889, Purdue's football team took a trip to Crawfordsville, Indiana. This small town was home to Wabash College. Because of its close proximity to West Lafayette, there was a rivalry between Purdue and Wabash. Over one thousand people attended the game, roughly one third of which were Purdue fans. The Purdue players were described as, "Herculean wearers of the black and gold" (Daily Argus).

Purdue started the game by receiving the kick-off. They scored within the first two to three minutes of the game. Throughout the game, the Wabash players went through a series of injuries. One such time was when a Purdue play by the name of Josiah Cottrell Teeters, the right guard for Purdue, got into a skirmish with a Wabash player known as Gentry. Gentry had a giant gash below his temple because Teeters had metal plates on the bottoms of his shoes. Wabash had an objection to this and the officials made Purdue remove the plates. Overall, it was a very rough game for the Wabash team and they lost eight players throughout the game due to injury.
"At the conclusion of the first half, after the smoke of battle had cleared away it was found that Purdue had gained thirty-four points and Wabash was where she started" (Daily Argus). By the end of the game, Purdue had scored forty-four points and Wabash was scoreless. "Purdue could not have been more elated had she won the championship and three hundred voices and half as many horns raised merry Sheol till the special train left at 7 o'clock for Lafayette" (Daily Argus).

The Purdue team became known as the "Boilermakers" through their rough way of handling the Wabash team. A sports column in the Crawfordsville newspaper was titled the "Slaughter of Innocents." In this article, it talks about the brutish tactics taken by the significantly larger Purdue team. This article was the first to call Purdue the "Boilermakers." Originally, it was meant as an insult. Since it was written in 1889, the name has remained to this day.
Powered by