Any one who has attended a basketball or football game here at Purdue  more than likely has seen Purdue Pete  at that game.  If you've bought your textbooks from the University Bookstore, you've probably also seen him on your bag or somewhere in the store.  Purdue Pete has been around for  since his creation in 1940.  With his presence at athletic events most students and faculty see him as our official mascot. Even though he is in fact the logo used by the University Bookstore. 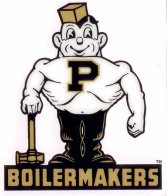 University Bookstore logo
In 1940 University Book Store owners Doc Epple and Red Sammons hired artist Art Evans to create an advertising logo  for their bookstore. Four years late in 1944 Purdue Pete got his name  when an editor for the Purdue yearbook,Debris asked Epple to use his face for the cover and asked him what his name was.  It was reported that he said "Pete". Thus Purdue Pete had been given his name. To Excite fans at football games in  1956  athletic directory Guy Mackey wanted to create a sports mascot. Purdue Pete then made his first appearance at a pep rally for the Missouri game in September 28, 1956 (Purdue Engineering). 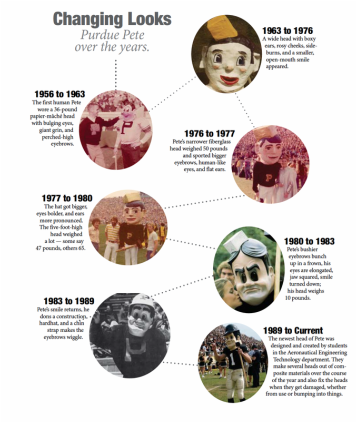 The first Pete would  remain from 1956 to 1963. He would be played by Larry Brumbaugh  in which he wore a  wore a 36-pound papier-mâché head with bulging eyes, giant grin, and perched-high eyebrows (Meyer, Kathy).
In 1963 Pete again changed looks in which he still had his square hat, fat cheeked, and  big eyes but this time Pete would have a smaller open mouth and smile.
Van Betulius would change Purdue Pete for the third time in 1976. This time the head would be made out of fiberglass and be an adolscent look with a less cartoon like style for the head  (Meyer, Kathy).
Moe Jackson who was Purdue Pete from 1976 to 1978 says that tweaks to the eyes that followed in 1977 and along with it more bulgy eyebrows(Meyer, Kathy).
As Purdue Pete turned 25, it was again time for another redesign, only this time Pete would take on a more mature look. He would have thick bushy eyebrows with an evil eye look on his face. His head  was also reduced to only 10 pounds and his sweater was replaced with a jersey (Meyer, Kathy).
In 1983  a more friendlier version of Pete with his smile returning was created in which his square cap would be removed and in  place of it he would come to wear a construction hard hat. (Meyer, Kathy).
Purdue Pete would then get his final makeover in 1989 when a problem arose with Andy Gentry the Purdue Pete at the time. He had broken his neck and high school and the weight of the head made it extremely difficult for him to keep the head of Pete held up.
To fix this, the aviation technology department created a head that weighed only 5 pounds and was made of composite materials. Purdue Pete would then continue to wear the jersey but would also start wearing football pants also (Meyer, Kathy). 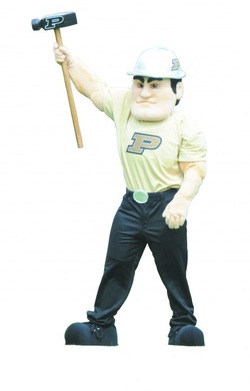 Athletic Departments attempt to redesign Purdue Pete
In 2011 the Purdue athletic department wanted to update Purdue Pete. This time though they had decided that it was time for a full body suit.  They believed that Purdue Pete's oversize head was to scary for younger fans and also  Professor Raymond Thompson creator of the Purdue heads was leaving the University. When he was revealed during the annual Black and Gold football game, he was booed off the field by Purdue students.  John Langenkamp a former Purdue Pete said, "It's horrible, absolutely horrible,"  "A complete embarrassment to the University." Long time member of the John Purdue Club Bill Donovan who had increased his funding for Purdue Pete each year chose not to contribute.Therefore, it was announced by the University on April 13, 2011 that Purdue would restore the past mascot (Levin, Jenny).